We are fortunate to share our canyon community with unique wildlife and plants
that cannot be found almost anywhere else in Orange County.

We need to be careful stewards of the largest wildlife and scenic area in Orange County.​
The information on this page comes courtesy of Joel Robinson at Naturalist For You: www.naturalist-for-you.org
If you would like more information, he can be reached at 714-649-9084

ARROYO TOAD (Anaxyrus californicus) – ENDANGERED SPECIES.
Extremely specialized habitat needs, including exposed sandy streamsides with stable terraces with scattered vegetation for shelter, and areas of quiet water or pools free fishes with sandy or gravel bottoms without silt for breeding. Adults are nocturnally active, remaining underground in the daytime, but occasionally seen moving daylight or resting at the edge of breeding pools in the breeding season. active from the first substantial rains from January to March, through August September. This toad is estimated to be absent from 65 to 75 per cent of range. http://www.californiaherps.com/frogs/pages/b.californicus.html 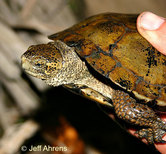 SOUTHERN WESTERN POND TURTLE (Actinemys pallida)
Diurnal and aquatic. This turtle is often seen basking above the water, but will quickly slide into the water when it feels threatened. Seldom basks by floating at the surface. Active from around February to November. May be active during warm periods in winter. Hibernates underwater, often in the muddy bottom of a pool. Estivates during summer droughts by burying itself in soft bottom mud. When creeks and ponds dry up in summer, some turtles that inhabit creeks will travel along the creek until they find an isolated deep pool, others stay within moist mats of algae in shallow pools while many turtles move to woodlands above the creek or pond and bury themselves in loose soil where they will overwinter until temperatures warm up enough for them to become active and the heavy winter flows of the creek subside, and then they return to the creek in Spring.
http://www.californiaherps.com/turtles/pages/a.pallida.html

CALIFORNIA NEWT (Taricha torosa)
Terrestrial and diurnal, often seen crawling over land in the daytime, becoming aquatic when breeding. (In some permanent bodies of water, adults retain their aquatic breeding phase characteristics and live in the water year-round.) Sometimes seen moving in large numbers to aquatic breeding sites during or after rains during breeding season. Terrestrial newts spend the hot dry summer in moist habitats under woody debris, or in rock crevices and animal burrows, but can
sometimes be seen wandering overland in moist habitat or conditions any time of the year. Longevity is not known, but it has been estimated that California Newts can live for more than 20 years.
http://www.californiaherps.com/salamanders/pages/t.torosa.html_

CALIFORNIA TOAD (Anaxyrus boreas halophilus)
​Inhabits a variety of habitats, including marshes, springs, creeks, small lakes, meadows, woodlands, forests, and desert riparian areas. In the spring and early summer, toads are often found at the edge of water, sometimes basking on rocks and logs. At other times of the year they are also found farther from the water where they spend much of their time in moist terrestrial habitats. Toads use rodent holes, rock chambers, and root system hollow as refuges from heat and cold.
http://www.californiaherps.com/frogs/pages/a.b.halophilus.html

PACIFIC-SLOPE FLYCATCHER (Empidonax difficilis)
Nests in dead alders. Habitat is moist woods, mixed forests, shady canyons. Breeds in wet forested regions. Often common in zones of coniferous forest, but there it seems to concentrate in deciduous growth, such as maples and alders, along streams. Also found in canyon groves of oak, sycamore, or willow.
https://www.audubon.org/field-guide/bird/pacific-slope-flycatcher

BLACK BELLIED SLENDER SALAMANDER (Batrachoseps nigriventris)
Adults are 1-1/4" to 1 7/8" from snout to vent. They conduct respiration through their skin and their mouth tissues, which requires them to live in damp environments on land and to move about on the ground only during times of high humidity. Inhabits mostly oak woodlands but also found in chaparral, grasslands, streamsides, and oak and pine forests. Found under rocks, logs, bark, and other debris in moist areas.
http://www.californiaherps.com/salamanders/pages/b.nigriventris.html

CALIFORNIA TREEFROG (Pseudacris cadaverina)
Nocturnal. Takes shelter in shaded rock crevices or small depressions on boulders near water during the day. Most commonly found along stream channels. Outside of the breeding season, they do not spend much time in the water. Inactive during very cold and very hot and dry periods. Adults use spring and summer habitat near streams, then move to crevices higher above drainages in fall and winter, remaining mostly inactive from December to mid March. Mark and recapture studies have shown that some females are found in the same location each year.
http://www.californiaherps.com/frogs/pages/p.cadaverina.html

NORTHERN PACIFIC TREEFROG (Pseudacris regilla)
Active both day and night, becoming mostly nocturnal during dry periods. During wet weather, they move around in low vegetation. In locations at low elevations where temperatures are more moderate, frogs may be active all year. At colder or hotter locations, frogs avoid temperature extremes by hibernating in moist shelters such as dense vegetation, debris piles, crevices, mammal burrows, and even human buildings.
http://www.californiaherps.com/frogs/pages/p.regilla.html

VALLEY CARPENTER BEE (Xylocopa veripuncta)
Females are a metallic black while males are fuzzy and gold with green eyes. They are the largest bees found in California. They are called “carpenter bees” because of the females’ ability to excavate tunnels in wood (including dead alder) to overwinter as adults in the tunnels. Flowers are the sole source of food and water for the bees. The bees have long lifespans and inhabit a wide variety of geographical ranges, which allows them to visit a number of different plants.
https://en.wikipedia.org/wiki/Xylocopa_varipuncta

BANDED ALDER BORER BEETLE (Rosalia funebris)
The larvae consume wood. The species generally prefers downed trees, instead of living trees, so the alder borer is not considered a pest. When handled or threatened R. funebris makes an audible noise similar to that of a squeaky running shoe, or a hissing sound much like air being let out of a bike tire.
https://en.wikipedia.org/wiki/Rosalia_funebris